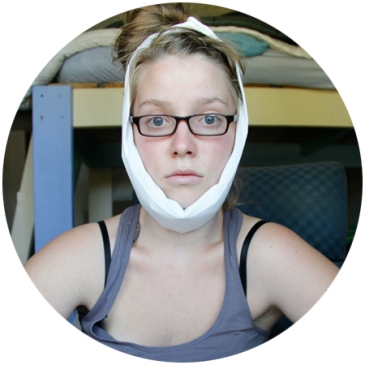 Several weeks ago, I’d nearly forgotten that this month marked the one year anniversary of an accumulated facet of my persona that goes unnoticed by the general populace but serves as a daily perturbation to myself. This facet doesn’t require much in the ways of explanation, but warrants a story via its sheer unexpected endurance.

I was one year younger, one year more invulnerable amidst a customarily stressful summer of juggling two jobs within an 80 hour work week, and one year toothier, with four wisdom teeth completing their emergence in my jaw. Having hosted those four budding molars for years without any professional indication that they needed to be extracted, the “wisest” of incisors would have been welcome to set up permanent residence in my dental cul-de-sac if they hadn’t been pushing together the gap between my front teeth. An iconic aspect of my semblance that had served as an adolescent source of contention, and later a pivotal aid in establishing my self-confidence, my gap was an important symbol of both my personal and business identities. Thus with one of my favorite assets diminishing before my eyes, I had to take action fast, and as soon as I returned to Portland for summer vacation, dentists were visited, examinations were conducted, referrals were made for dental surgeons, and appointments were scheduled. Come August, I was all set to endure the surgery that’s made many a chipmunk out of even the most sallow-faced patients, and having been regaled with a myriad of nightmare stories including my friend Nyssa’s immense pain that even ice cream couldn’t quell, the school jokester who’d asked my mom if she’d rubbed orange peels on the pronounced spots where her jaw was badly bruised, and my father’s excessive bleeding that required immediate medical attention, I was far from enthused about the whole ordeal.

My major concern entailed something the nurse had momentarily paused in her incessant description of her favorite dishes at Noodle House to tell me during my pre-surgery check up. According to my $200 x-rays, my wisdom teeth had matured to the extent that the roots were anchored far down into the meat of my gums, right next to the nerve that’s responsible for all the feeling in my lower jaw. Even with the x-rays, the surgeons couldn’t determine if the nerve ran through a hole in the roots of my teeth or if it merely paralleled them, but if it was the former scenario, they would have to severe the nerve to extract the teeth, leaving my jaw numb for the rest of my life.

Come surgery day, I met with the doctor who’d flirted with my mom about her predominantly purple attire (the same color the medical center boasted in their scrubs) and the noodle-savvy nurse who’d gleefully shown me the top of her waist-high underwear to prove that purple superseded the scrubs in this facility. With the future of my nerves in these competent hands, I was sedated, and all else of that appointment beyond waking up drooling and being escorted to the car is a mystery. In the post report, however, I received the great news that it turned out the nerve only paralleled my teeth, and there was no severing necessary. Over the next week of uncontrollable salivation, a daily bout of bleeding, and slight puffiness that disappointedly did not warrant any chipmunk jokes, I couldn’t feel my jaw at all, but could rest assured that with copious amounts of Oxycodone-laced apple sauce, a water syringe to clean the cavernous holes at the back of my mouth, and the comical head sling that was meant to keep the swelling down, I would heal.

Soon, the pain had subsided and despite the prominent bruises on my face, the thick lisp I’d developed, and the lack of feeling in my jaw that made drooling an inescapable mannerism, it was back to the old, grocery customer service grind. After days of accidentally drooling down the front of my uniform and telling customers, “The ithe ith down aithle thixth,” my symptoms began to subside, and it seemed I’d been successfully inducted into the club of wisdom teeth extraction recuperators.

Well, all my symptoms had subsided except for one: I still couldn’t feel my jaw.

After a couple weeks of the pins and needles sensation that plagues sleeping limbs or nerves that are overcoming a hearty dosage of anesthesia, it was time to bring my plight to the attention of Dr. Old Tease and Nurse Mauve Panties. The doctor dragged several instruments back and forth across my jaw, and stabbed me with a sharp little poker to pique a reaction, but if I hadn’t borne witness to his attempts, all of them would have gone completely unnoticed. According to the doctor, however, there was nothing to fear. A lot of patients experienced delays in the return of sensation, and because my nerve had been so close to the roots of my teeth, it was likely it had been bruised during the operation. Thus, feeling would take a long time to return to my jaw, if bruising was all that occurred. Without another $200 x-ray, however, there was no way to tell for certain what had happened under the operating knife…

So, without the slightest desire to subject my parents to another large expenditure, I did the only thing you can do in an inconclusive situation like this: I waited.

And returned to classes.

And enjoyed an October vacation in LA, only to discover how weird it is to kiss your boyfriend when one lip is insensate.

And went on one of SCAD’s excessively long winter breaks to enjoy homemade pumpkin pie, pumpkin scones, and pumpkin bread through a comatose mouth.

And waited some more.

And returned to school for my last two quarters, posed for graduation photos with a tingling sensation in my smile, and moved out to Los Angeles to start the infamous “next chapter” of life.

I can’t for the life of me believe an entire year has past since I first lost feeling in my jaw. One month into the ordeal, I couldn’t fathom enduring such a nuisance for the six month period my doctor predicted, and six months in I figured I must be getting close to recovery now!

But alas, here I am celebrating the one year anniversary of what may very well become a lifelong component of my face. While the numb sensation was excruciatingly aggravating for the majority of this experience, the fact that I’ve reached a point of blissful unawareness for the majority of the day is a testament to how easily humans can acclimate to different situations. At least there’s hope in the fact that we as a species are powerful adapters, and although our generally keen memories may cause frequent reminiscing of the days when we could rest our chin against our palm without hammering vibrations erupting beneath our skin, my year-long relationship with Numb Jaw has taught me not to place so much stock in a small thing like a shoddy nerve.